PLEASE NOTE: YOU MUST OPEN THE SPOTIFY APP TO STREAM THIS ALBUM

1. Click one or more tracks. Your shopping cart will open in a new window. 2. Checkout (PayPal required). 3. Immediately receive an email with your PDF download links.

Sorry, there are no posts to display

Called “the next big jazz guitarist” by NPR, Nir Felder is a new voice in instrumental music. Equally adept across a wide range of genres, inspired by icons from John Coltrane to voodoo chile Jimi Hendrix, Felder has forged a unique and highly recognizable sound at a young age and quickly become one of New York City’s most highly sought after musicians as both a solo artist and as a sideman. He has performed with, among others, Chaka Khan, Diana Krall, John Mayer, Esperanza Spalding, Terri Lyne Carrington (with whom he recorded the Grammy-winning “Money Jungle”), Vijay Iyer, Jack DeJohnette, Meshell Ndegeocello, the New York City Opera, Dianne Reeves, Joe Lovano, Snarky Puppy, Bobby McFerrin and Lizz Wright, at venues including Radio City Music Hall and the Village Vanguard and on major national televised programs including the NBC Christmas Special. He is also a member of the new co-lead all-star band Band of Other Brothers (with Jeff Coffin, Jeff Babko, Will Lee and Keith Carlock). Seeking a more personal creative outlet, Felder first formed his own group in 2010, performing shows throughout the United States, Canada, Mexico, Europe and Asia. Felder’s critically acclaimed debut “Golden Age” (Sony/OKeh) has been called “absolutely beautiful” by The Seattle Post-Intelligencer, “lyrical and lofty” by The New York Times, “mesmerizing” by The Boston Globe, “a melodic triumph” by the New York City Jazz Record, and “mind-boggling” by All About Jazz. “If the hope, thought, depth and heart displayed on this recording are any indication, Felder sees his own golden age happening right now – and I wholeheartedly agree. A great recording.” – Downbeat Magazine Editor’s Pick. Felder’s next release is slated for 2017. The new album, tentatively titled “Interregnum”, seeks to build on the direction established with “Golden Age” – taking jazz music in a new direction for the 21st century.

“Absolutely beautiful. Jazz fans…will be looking for great things. They will not be disappointed.” – SEATTLE POST-INTELLIGENCER

“Wordless lyricism and…a lofty but approachable concept involving the vagaries of hope and historical memory…Mr. Felder keeps both feet on the ground, and his eyes trained upward.” – THE NEW YORK TIMES

“Could make you think of Sonic Youth in a quieter moment… [A] mesmerizing flow.” – THE BOSTON GLOBE

“Felder’s music…shines brightly on it’s own.” – THE LA TIMES

“If the hope, thought, depth and heart displayed on this recording are any indication, Felder sees his own golden age happening right now – and I wholeheartedly agree. A great recording.” – DOWNBEAT MAGAZINE, EDITORS’ PICK

“While there’s no shortage of jazz guitarists out there, it’s still rare for one to emerge with a debut album so fully-formed…A striking collection of thoughtful and dynamic compositions.” – WNYC SOUNDCHECK

“Composition skills that show what an art music can be. “ – THAT MUSIC MAGAZINE

“On the cutting edge of impressionistic creativity…Nir Felder continues to play to the beat of his own drums and with captivating results.” – CRITICAL JAZZ

“Nir Felder means to be all things to all listeners and pulls it off, handily.” – AUDIOPHILE AUDITION

“A fine debut from a talented player.” – ABOUT.COM

“Gorgeous…a shining beacon of an album.” – THE JAZZ BREAKFAST

“Felder has his own very special sound, quite remarkable for someone who’s relatively new on the international scene.” – MARLBANK

“NPR has tagged Nir Felder ‘The Next Big Jazz Guitarist’. On the strength of ‘Golden Age’, they just might be right.” – STRAIGHT NO CHASER

“Scores on many fronts…a fearless and resplendent recording.” – JAZZ IN SPACE

“Rewards repeated plays…Felder is young, but he plays with mystery and stature.” – THE BEACHCOMBER 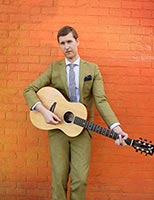